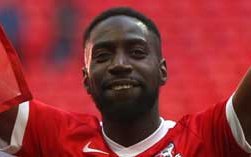 York City moved up to fourth in the table with a fifth successive victory in a truly bizarre encounter at AFC Telford United.

The Minstermen scored four times before the break through skipper Sean Newton’s brace being added to by newcomer Raul Correia’s first goal for the club and another from Adriano Moke.

Former Premier League striker Sylvan Ebanks-Blake had already replied at the other end, until on loan centre-back Jonny Burn incredibly made it 5-1 early in the second-half.

However, Ebanks-Blake’s second of the contest and another from Bucks captain Shane Sutton meant it wasn’t an easy final half-hour for the travelling faithful.

The visitors earlier made a single-change with former skipper Simon Heslop replacing Daniel Rowe, who switched to the bench, while their opponents included latest signing Ellis Deeney after joining from Tamworth.

But City suddenly struck twice within a minute; first the recalled Heslop’s corner was headed in by Newton and then latest signing Correia robbed goalkeeper Ryan Schofield following a back-pass.

Connolly instantly despatched another effort over and teenager Schofield smothered from Correia, although Ebanks-Blake headed a reply after Ryan Wilson crossed midway through the opening half.

Scottish midfielder Connolly next curled too high, but the visitors restored their two-goal margin with a virtual repeat of the first when another Heslop corner was met by Newton’s looping header – albeit with a suspicion of a deflection.

However, York’s defence was then split by a single through pass as keeper Adam Bartlett crucially denied Jordan Murphy at the expense of a corner.

Bucks newcomer Deeney hoisted over a further attempt, while Burn also cleared well before Moke added a fourth goal when Correia was initially blocked after the midfielder drove forward just ahead of the break.

John Marsden instantly flashed a shot wide at the opposite end, but the visitors were well in charge on completion of the opening forty-five minutes.

York withdrew top scorer Jon Parkin at the interval with weekend marksman Amari Morgan-Smith coming on, but it was Bencherif seeing an immediate finish ruled out after Correia badly scuffed his effort.

The hosts had also completed a triple change, including leading marksman Marcus Dinanga being introduced from the bench.

However, Josh Law’s early free-kick struck both uprights and Burn tapped in a fifth goal before his slip witnessed Bartlett once again saving well from Dinanga.

Midfielder Moke survived a couple of overly heavy challenges, until Ebanks-Blake’s low drive beat Bartlett just inside his upright with more than an hour played.

Newton replied high and wide moments after unsuccessful handball claims, but it was skipper Sutton then diverting in Deeney’s corner to further reduce the deficit.

Marsden next fired wide before Moke limped away and Daniel Parslow joined earlier replacement James Gray on the pitch. He slotted in at right-back with Law moving into midfield.

But Bartlett was again called upon when two-goal Ebanks-Blake burst through, before producing another superb block from the ex-Wolves goalscorer as the hosts cast additional players forward.

York were now under constant pressure and former City loanee Jordan Lussey drove wide, while the outstanding Bartlett yet again excelled to keep out Connor Johnson’s header at a corner.

David Ferguson then hacked clear of the line when Marsden went close to another and Parslow also vitally blocked as the total chaos finally drew to a close.