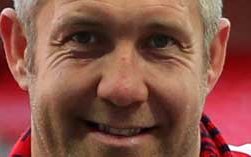 York City are set to be without leading goalscorer Jon Parkin for the next “two or three weeks” after undergoing minor knee surgery.

The 25-goal striker missed their dramatic 3-2 victory against Southport on Tuesday evening, although it’s hoped the veteran marksman will return in time for the potential play-offs.

“He’s just had a minor operation tonight,” manager Martin Gray revealed to BBC Radio York. “We had him scanned yesterday and he’s getting his knee cleaned out a little bit. So Jon’s going to be out for two or three weeks, and hopefully we have him back towards the back end of the season and before the play-offs.”

To further add to selection concerns, Alex Kempster and Louis Almond both appeared to suffer hamstring injuries during the game while on loan Alex Pattison also had to be withdrawn.

“Kempster has possibly got a slight hamstring [injury],” Gray added. “Louis is quite similar we think. To what degree, we don’t know.

“But hopefully Alex Pattison’s is only minor. We’ll have them assessed and scanned if they need to be and get ready for Chorley.”

Following Kempster and Aidan Connolly earning the hosts a clear interval advantage, they were later pegged back, until substitute James Gray, only just back from a loan spell at Tamworth, claimed a dramatic injury-time winner.

“He’s had a hard time since he’s come in and probably hasn’t done as well as he would have liked,” namesake Gray admitted. “I thought when he first came he was a bundle of energy, but just couldn’t score in his first three or four games.

“And the longer that went on it psychologically starts having an effect on forwards. But I was delighted for James because he’s brave and honest and wants to do well. And you could see that in the way that he celebrated, it meant so much to him.”