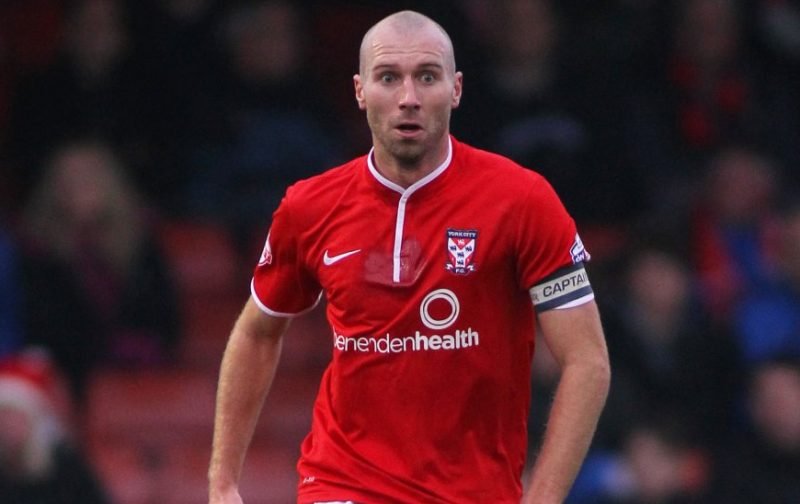 Travelling back to April 2015 as a true goal-of-the-season effort from their captain finally guarantees the Minstermen’s Football League status.

York City can definitely look forward to league football next season having secured a fourth win in five games against Morecambe at Bootham Crescent.

The hosts had to come from behind after Paul Mullin gave their visitors an early lead cancelled out by Guadeloupe international Stephane Zubar before the break.

Skipper Russell Penn then scored the goal of the season to the delight of joyous fans who will be celebrating their latest 2-1 success long into the night.

Manager Russ Wilcox earlier made a single-change with the suspended Dave Winfield being replaced by full debutant Shaun Miller.

But it was their opponents making the much better opening and going in front after just ten minutes. Penn misplaced a pass and Padraig Amond’s cross produced an Aaron Wildig shot diverted in by Mullin.

Alex Kenyon, who scored twice for the visitors in their weekend victory against Portsmouth, immediately headed over from a corner while Wildig struck just too high.

York hadn’t shown anything for the first twenty minutes, until Miller dragged across goal before Jake Hyde was similarly wide from a Michael Coulson pass.

Morecambe’s Laurence Wilson had a long-range free-kick deflected behind in reply and Amond drove straight at Michael Ingham before Coulthirst curled wide at the opposite end.

However, City were back in it with another set-piece goal as Luke Summerfield delivered a 34th minute corner headed in at the far post by Zubar.

Fellow loanee Brad Halliday supplied a couple more dangerous crosses from the right, while Jamie Devitt only threatened the roof of the David Longhurst Stand ahead of the break.

The Shrimps had their two leading goalscorers introduced from the bench by the time City attacked towards their favoured home end at the start of the second period.

But York’s own hit-man Hyde was soon inches away with a curler towards the top corner, and was then blocked on the line from another Summerfield delivery.

The hosts weren’t to be denied their defining moment, though, and Penn instantly lashed a glorious 35-yarder into the top corner – directly in front of the delighted home faithful.

It nearly became three as Hyde struck narrowly wide minutes later and then called on loan Liverpool goalkeeper Danny Ward into action at his near post.

Coulson next missed the target and Wildig’s reply could only find the away fans, while York withdrew on loan Miller for Femi Ilesanmi before Tom Platt also replaced Summerfield.

Morecambe weren’t finished, however, and Amond headed wide with just over ten minutes remaining, before keeper Ingham raced out to deny Kevin Ellison as the final moments approached.

Hyde was wide from distance at the other end, but his side successfully managed four minutes of additional time without further incident.