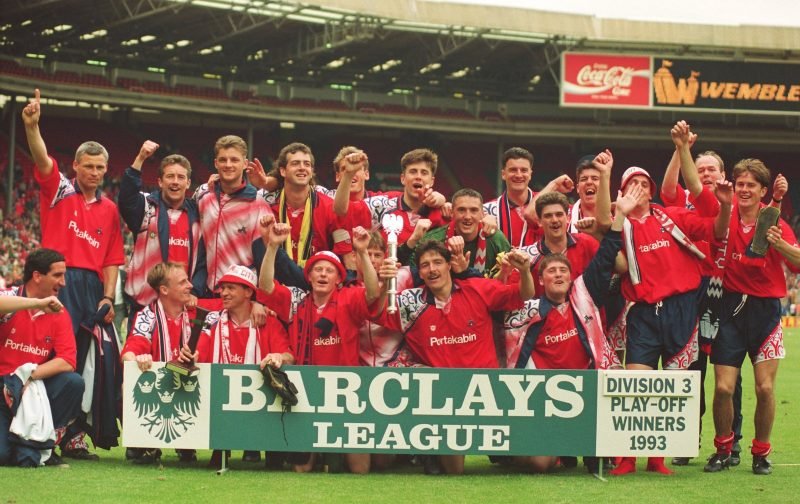 Twenty-five years ago today, 29th May 1993, York City completed a dramatic penalty shoot-out victory against Crewe Alexandra in their Third Division play-off final on their first-ever visit to Wembley Stadium.

Around ten thousand travelling Minstermen packed into the famous home of English football to witness their favourites taking on a highly-rated side who had totally demolished Walsall 9-3 on aggregate in their semi-final. 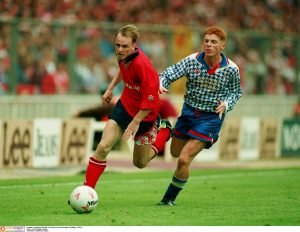 The brilliant Jon McCarthy races away from Crewe’s Neil Lennon

But York already finished higher in a league table they had actually led at Christmas and were under the inspirational leadership of Alan Little – just two months after replacing Bristol Rovers-bound John Ward.

York proceeded to dominate the opening half while playing some lovely attacking football. Winger Tony Canham crashed a 20-yard shot against the crossbar with the goalkeeper well-beaten while skipper Paul Stancliffe was in imperious form at the back.

City hit the woodwork again following the interval through another superb run from the brilliant Jon McCarthy, who then surged clear on a fabulous 50-yard solo break in the final minute before hoisting his finish over the crossbar and into the massed York fans.

The deadlock was finally broken in extra-time. Full-back Andy McMillan began the move down the right and allowed leading scorer Paul Barnes to send in York-born Gary Swann to crash his shot joyously into the net.

However, with just a minute remaining, late substitute Steve Tutill inexplicably handled from a Dave McKearney corner and the right-back calmly drilled in from the spot to sensationally equalise.

Somehow York steadied themselves from that crushing disappointment to hold their nerve during the penalty shoot-out. McCarthy, Barnes, Canham and Nigel Pepper were each clinical from twelve-yards, until goalkeeper Dean Kiely sprang to his left to keep out Gareth Whalley.

And with a whole season resting on a single kick of a football, City left-back Wayne Hall stepped up to steer his conversion just inside keeper Mark Smith’s left-hand post to secure a famous promotion.