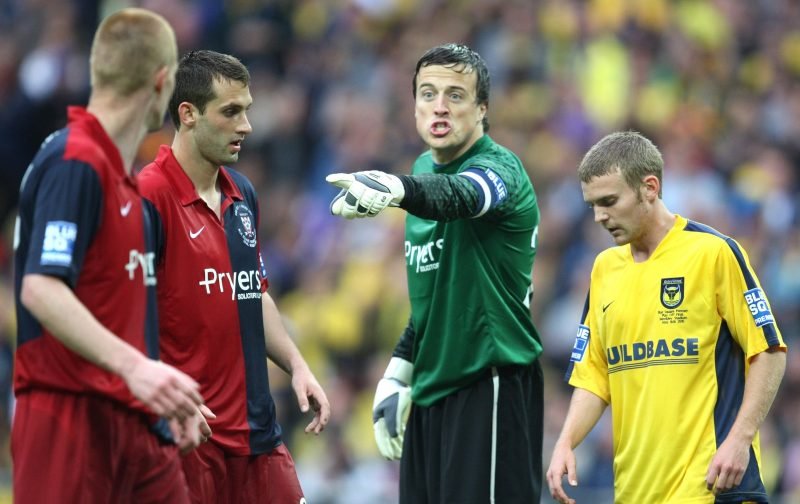 Eight years ago today, 16th May 2010, the Minstermen were playing for only the third time in their history at Wembley Stadium; although this is one that most of their supporters naturally want to totally erase from their memories – as indeed did their players at the time.

Dejected York City centre-back David McGurk admits he wants to “lock himself in a room” while attempting to recover from the disappointment of a heartbreaking 3-1 play-off final defeat to Oxford United at Wembley.

The Minstermen never recovered from a simply disastrous start in which Matt Green and James Constable both scored inside the opening twenty minutes of the contest.

Goalkeeper Ryan Clarke later fumbled Ben Purkiss’ hanging cross into his own net ahead of the interval, before York’s Michael Rankine missed a glorious chance to equalise in the second-half. 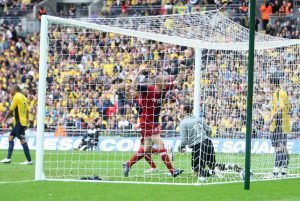 However, the U’s finally wrapped it up in added time through substitute Alfie Potter, when breaking from a woefully delivered corner from fellow replacement Courtney Pitt at the other end.

“I don’t know what I am going to do in the next week,” McGurk told The Press. “I am going to lock myself in a room, I think. We obviously didn’t settle down in the first 20 minutes and we found ourselves 2-0 down.

“Once we got ourselves passing, I thought we caused some problems. It’s just a massive, massive disappointment because I was so confident – not over-confident, just really confident going into the game.”

Ace striker Richard Brodie was in total agreement as he reacted: “I wouldn’t say they were a better team than we were but once you concede those goals it is always hard to come back.

“We have got to regroup. We will take it like men. We will get back together, work hard and come back bigger and stronger.” 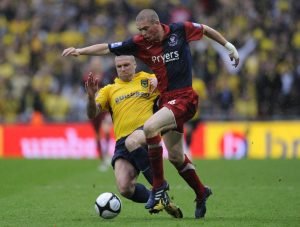 York goal ace Richard Brodie on the charge at Wembley: “We will take it like men,” he said

Meanwhile, City goalkeeper Michael Ingham admitted to beginning to seriously dislike the national stadium:  “I am beginning to hate this place. I have played here twice and conceded five goals,” he added. “We have got to regroup very quickly, come back quicker and get ready for next season.

“It’s a tough place to come. It’s probably a bit difficult because of the occasion and when you suffer defeat. As I said, I am beginning to hate the place and I am aiming for automatic promotion next year and not through the play-offs.”