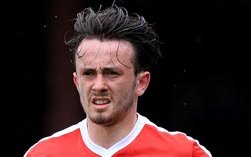 For the second time this season, York City were denied by a very late Darryl Knights strike after the recalled Aidan Connolly had given them a 73rd minute lead at Tamworth.

The former Kidderminster Harriers winger spectacularly half-volleyed past Adam Bartlett from the edge of the area in the final minute, having also claimed an injury-time winner in the reverse meeting at Bootham Crescent just over three months ago.

Connolly, who missed out against Stockport County last week due to illness, had earlier struck his fourth goal of the campaign to offer the visitors genuine hopes of a first victory in three games.

Manager Martin Gray made a couple of changes with Connolly and Connor Smith replacing Josh Law and 25-goal leading scorer Jon Parkin – the latter omitted due to the artificial playing surface at the Lamb Ground.

Louis Almond returned on the bench following a three-month absence with a dislocated shoulder, and after completing over an hour for the reserves in the North Riding Senior Cup earlier in the week.

Latest arrival Connor Brown shot well off-target from an early Sean Newton corner, but the former Guiseley right-back was soon heading off the line following home skipper Luke Jones meeting another corner. On loan defender Jonny Burn was off the pitch at the time receiving treatment.

Joe Kettle was in turn cautioned for bringing down the breaking Smith, although it was team-mate Bradley Reid hoisting over from Knights’ cross after Newton had already glanced a Simon Heslop free-kick comfortably wide.

Tamworth themselves broke away with the combination of Burn and Brown recovering to challenge, while Smith’s inviting cross towards the other end found no willing taker. But Adriano Moke’s misplaced pass then put Heslop in serious trouble and Tom Shaw dragged his resultant shot wide.

Defender Burn’s long ball forward witnessed Smith’s effort tuned aside by Jack Stevens, while Heslop’s drive was blocked at the expense of a third corner in rapid succession. And the York-born playmaker’s strike from that was again deflected over, with the keeper mishandling from the next corner and Raul Correia desperately trying to scramble in before Brown lashed over at distance.

The Lambs were again to threaten, though, with Reid heading wide at the far post from newcomer Rhys Sharpe’s delivery. And Reid soon glanced another header beyond the upright from Knights’ cross as the interval was finally reached.

York right-back Brown picked up an early second-half caution for a deliberate drag back, with Knights’ dangerous free-kick almost slid in at close-range by Reid. Newton’s replying corner was headed onto the outside of a post by Hamza Bencherif, before Connolly struck wide and Smith had another effort deflected behind.

Goalkeeper Bartlett next parried from Callum Powell, while Moke curled towards his opposite number Stevens after being released by Heslop, who also lifted over the target before Newton blazed out of the ground.

But the hosts were almost in front when a long clearance was headed onto an upright by Aman Verma – and the ball fortunately rebounded behind off keeper Bartlett; with Newton’s sudden reply landing on the roof of the net.

The Minstermen made the first change as James Gray replaced on loan Correia, although it was Verma immediately finding the clutches of Bartlett, who also gathered from Knights before David Ferguson’s diving header at Moke’s cross was saved by Stevens.

Substitute Gray’s delivery from the byline was next almost diverted into his own net by a covering defender, but the visitors still made the breakthrough with Connolly’s low shot beating the keeper on its way into the bottom corner.

Daniel Parslow replaced the limping Brown with around ten minutes remaining after Bartlett had already collected Powell’s deflected effort. Reid then screwed an opportunity wide ahead of the recovered Almond taking over from goalscorer Connolly.

But York were ultimately again denied in the final minute when Knights superbly half-volleyed in after Bencherif initially headed out, although Smith had an instant opportunity to reclaim the advantage when heading Ferguson’s cross wide before Knights rapidly proved too high.