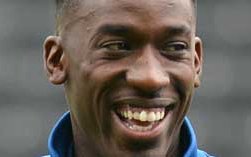 York City won a fourth successive game and lifted themselves back into the play-offs at the expense of Bradford Park Avenue.

Manager Martin Gray earlier made a couple of changes, one of those enforced with on loan Alex Pattison unfortunately having returned to parent club Middlesbrough.

Latest signing Raul Correia was handed an immediate debut at the expense of Morgan-Smith, while Daniel Rowe also found himself recalled to the starting line-up.

The visitors featured a trio of ex-York players in skipper Nicky Wroe, Oli Johnson and Boyes, with former City loan defender Mark Bower leading them from the dugout.

The Minstermen made another unconvincing start with their opponents claiming for an early penalty, although skipper Sean Newton – who signed a contract extension earlier in the week – required Steven Drench to turn over in the first home attack. Danger-man Parkin then couldn’t offer sufficient contact from the corner.

Adriano Moke next found only the side-netting from the edge of the area following Aidan Connolly’s assist. Johnson replied directly towards Adam Bartlett and Nicky Clee was narrowly wide as the visitors continued to appear much improved from the side comprehensively defeated 5-0 in the reverse fixture at the beginning of the campaign.

Newcomer Correia soon failed to control an inviting Parkin assist when well-placed, while suspect defending at the other end almost let in ex-Minstermen striker Boyes before Matt Hill’s effort was deflected behind. Drench then collected Connolly’s strike from distance at the second attempt.

Bradford were forced into a change around the half-hour mark with Javan Vidal replacing the injured Mark Ross, although they were again pressing as Bartlett couldn’t hold from Jamie Spencer and David Ferguson cleared.

York were appearing seriously unconvincing. Johnson’s attempt following another long Clee throw-in looped onto the top of the crossbar – but Bartlett at least had it covered. Debutant Correia’s reply was then deflected behind.

However, City were in front just ahead of the break with Parkin calmly slotting into the bottom corner from Connolly’s pass inside the area. Avenue’s Johnson responded by badly slicing into touch following a weak defensive header by Rowe.

The Minstermen were attacking towards their favoured home end in the second-half, but it was Spencer with a dipping effort narrowly over prior to substitute Morgan-Smith quickly displacing Rowe.

Full-back Josh Law suddenly tried his luck from distance and Drench claimed at the second time of asking ahead of the oncoming Connolly, while Morgan-Smith struck wide after his initial attempt was blocked.

But Morgan-Smith vitally doubled the home lead when bundling in skipper Newton’s 65th minute cross from out on the left. His fifth goal of the season.

Wayne Brooksby’s reply was taken by Bartlett before suffering a knock and being replaced by Adam Nowakowski. Johnson also scuffed across goal for the visitors, that ahead of Boyes being denied on his return as Bartlett brilliantly clawed away his header – and the follow-up glanced an upright.

York almost had a third goal when Newton’s shot from the edge of the area was deflected behind, and Parkin also threatened with a header before Hamza Bencherif diverted Moke’s cross into the side-netting. Connolly next shot too high from distance.

Connolly was then cautioned for simulation when challenged on the edge of the area, while James Gray displaced debutant Correia late on, although it was Morgan-Smith suddenly dragging across goal with the substitute hoping to profit.

There was a late scare for the home faithful, though, as Boyes turned in Johnson’s cross to reduce the deficit after Bencherif had lost possession in added time. Returning defender Shane Killock then headed over for the visitors from a corner during an anxious final few seconds.