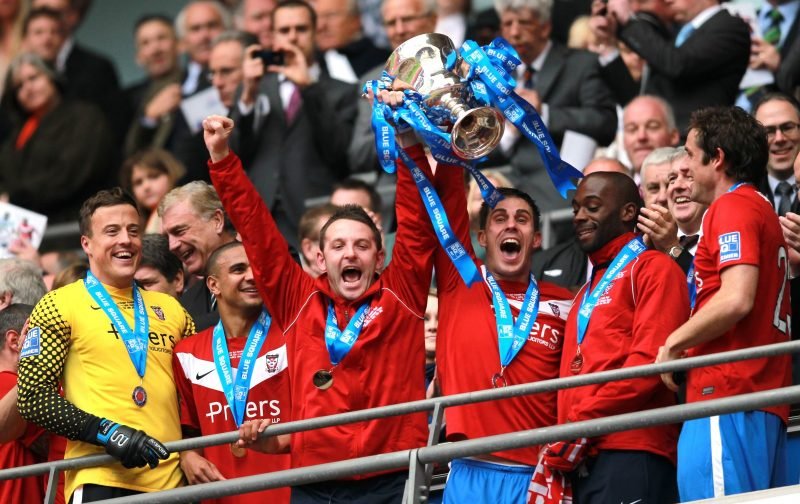 Six years ago today, 20th May 2012, York City were proudly completing the most incredible nine days of their history when winning at Wembley for a second time in just over a week in their promotion play-off final.

Having already taken care of Newport County and claimed their first-ever national knockout competition in the FA Trophy, the Minstermen sensationally came from behind at the national stadium to defeat big rivals Luton Town and secure a return to the Football League following an eight-year absence.

That was despite the colossal shock of Andre Gray giving their opponents the lead inside just two minutes. But Ashley Chambers equalised with a brilliantly controlled half-volley before fans’ hero Matty Blair poached the truly historic winner early in the second-half. 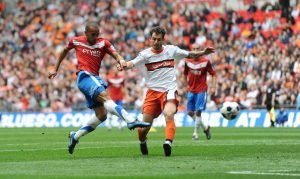 Ashley Chambers produces a superb half-volley to equalise at Wembley

“To come to Wembley two weeks running and do the double is an incredible feeling,” jubilant manager Gary Mills told The Press. “In fact, with the ground announcement, it’s been a terrific treble and probably the best hat-trick ever at York City Football Club. Luton probably did us a favour bringing so many fans as it turned it into a bit of an away game. In truth, I only heard the York supporters. They have been brilliant all season.”

“Eight years is a long time in anyone’s life,” chairman Jason McGill admitted. “When the final whistle went there was a feeling of elation. I don’t see why we can’t operate, break even, invest in the squad and put together a team that can compete in League Two. I truly believe with the structure we have got that we are a top half of League One team.” 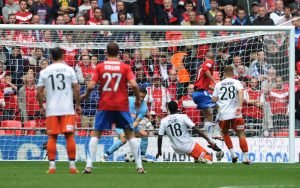 Skipper Chris Smith felt it was a case of righting past wrongs having been relegated out of the Football League with the club before: “It’s unbelievable to be back in the League,” he exclaimed. “It feels like I have repaid some of the fans. I am not saying it was all my fault but I was part of that squad that got relegated. Now, back in the League, I feel the club is in a more stable position.”

Delighted goalscorer Chambers  continued: “It’s been a crazy, crazy time, but it’s been fantastic. It’s why you play football. We came here eight days ago and put in a shift then, and now we’ve won again, after going a goal down. It’s hard to describe the emotions. When it settles down, I think we will realise what it’s done for the fans and for the city.”

However, once again it was Blair emerging as York’s match-winner while claiming his twentieth goal of a truly incredible campaign: “It has been not just a great season for York but a great one for me as well – scoring 20 goals from wide and being a part of such a great squad has been amazing,” he added. “The feeling is just incredible. I’m happy to have scored but it’s about the whole squad.” 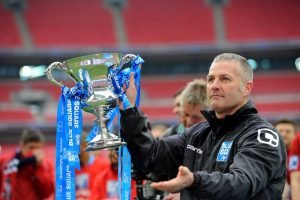