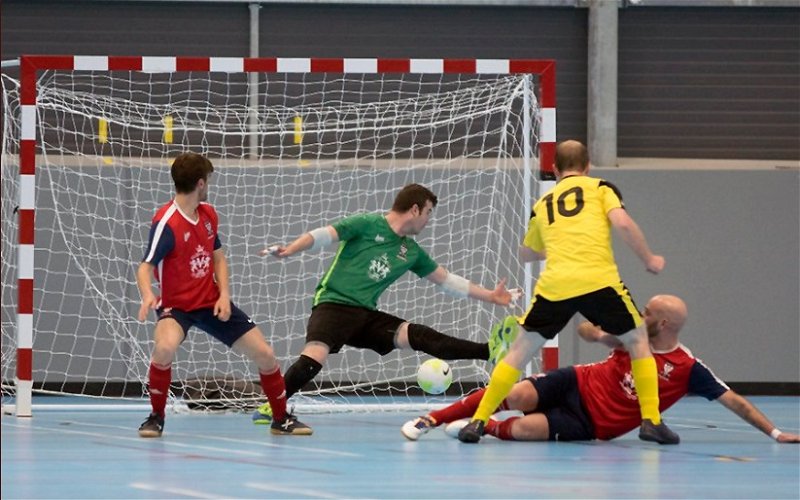 York City Futsal were unable to deny Reading Escolla from securing the National Super League title after an 8-1 defeat in their final game of the season at the Powerleague Trafford Centre in Manchester.

The confident leaders required a victory to definitely clinch the title and lifted a decent early chance over – but soon went in front as they found the net following a corner.

York’s young side were once again missing a number of key players, and almost levelled following a fine break from skipper Michael Bulmer – until the keeper blocked; although it then took a great double-save from Martin Michels to deny the visitors at the opposite end.

However, Reading still added a second goal after Michels had initially saved well and the rebound was this time decisively converted.

And a third was to follow when cutting inside from the right and driving high into the far corner; while busy City keeper Michels twice blocked before unsuccessful handball claims prior to the interval.

York went close to reward with a shot over the crossbar following the restart, before their opponents produced a well-crafted fourth goal to further confirm their superiority.

Both keepers saved well when threatened but a fifth still arrived for the champions-elect after a missed clearance, while another rapidly followed against always willing but understandably tiring opposition.

That inevitably produced another strike when the valiant Michels was forced to advance from his line and the ball was calmly slipped beyond him and into an inviting net.

Bravely York reduced the deficit with a sharp finish from development player Joe Cooper at a low corner, before also having a further effort blocked by the keeper.

City’s man-of-the-match Michels then had to be withdrawn following a knock; and an eighth goal duly followed when the nominal hosts carelessly surrendered possession inside their own half – before Reading celebrations began at their first-ever national title.